Listen to the Material

Listen to the Material

The international architecture office Superuse considers design not as a linear, but circular process of use and re-use. It focuses on the latent properties of used materials and how these offer an added value to new products and buildings. Their work is based on the Blue Economy, a holistic view of nature, mankind and economy with the aim of no longer producing waste, but rather returning everything to the material cycle. For advocates of this principle, Superuse are currently transforming a former adventure pool in Rotterdam into the BlueCity office centre, where they also work themselves.
Jos de Krieger is one of the partners of Superuse and has been working on the reuse of materials for almost 15 years. He was creative director for Festa and speaker at TedX in Christchurch in 2016. Currently he is a research mentor for TU Delft graduate students at the Faculty of Architecture. Maximilian Liesner spoke with him.

Rather than implementing a design from your vision, Superuse’s approach is, like you put it, to “listen to the material“ you have at your disposal. What is it that material can tell?

Usually, a lot of shape will come from surroundings and concepts. Of course, we also do that to create a functional space. But all the material that you will find will have a given colour and a given size. All these aspects of the material will help to shape the design. So if you listen to, let’s say, a window frame correctly, it is, for example, one by two meters. That will, in some ways, dictate the construction that you are going to make. And an aluminium window frame will be different from a wooden or a plastic one. In a traditional design process, a lot of labour and energy is being invested into making a material do what the architects want. But if you listen to all its characteristics, you do not have to force it to become something that it is not.

In the final building, you expose the re-used material quite radically.

Not necessarily. In some of our projects, there is a material re-use that you do not see at all. It really depends on the project. For example, if you look at the Villa Welpeloo in Enschede, almost 90 percent of the steel construction is re-used from a textile machine, but you only see roughly five percent. All the rest is hidden and it does not matter for us or for the building to show the steel. In this case, it is just a functional object. Most of the materials in Villa Welpeloo are not easily detectible as being from a waste source. 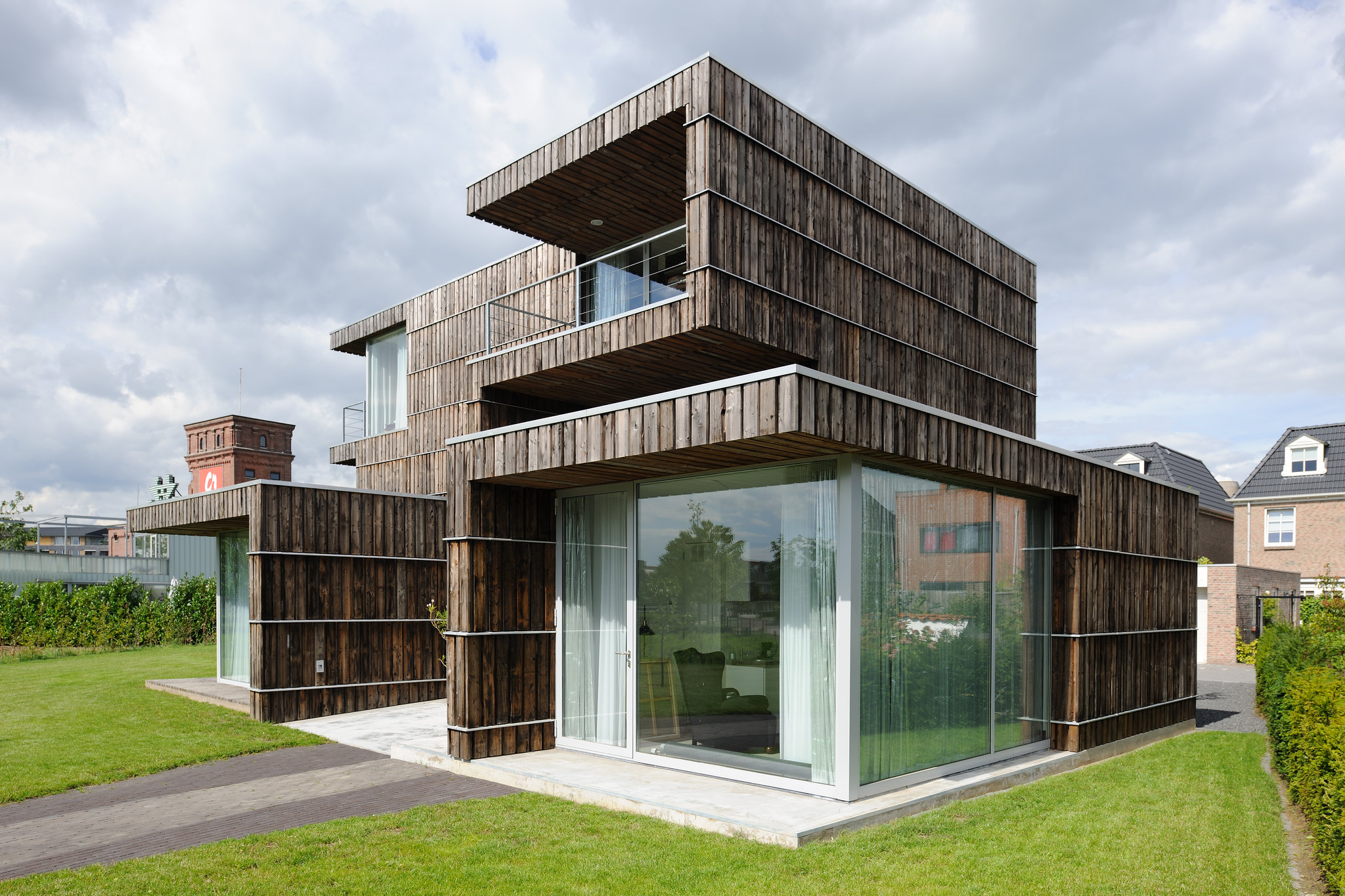 Even the wooden façade from old cable reels? You left the scars of the planks exposed and did not repair the broken pieces.
I would say there are no broken, but irregular pieces that were the inlets for the cable. But if one does not know the origin of that difference in appearance, one would not be able to say that this is from a cable reel. It really depends on the eye of the beholder and her or his background knowledge.

Villa Welpeloo is used by an art collecting couple who want to make their collection accessible, so it is a gallery combined with housing. Is it more difficult to convince higher earners to build with re-used materials?

There was no need for convincing, they approached us. They wanted their house to be an artwork, to support our mission of designing with waste materials and to have one of the first houses in the world that is made of waste materials as much as possible. So they had a really strong opinion of what architecture could be.

Do you think that uniqueness and distinction is playing a role in such a case? When re-using, recycling and upcycling hopefully become a routine someday, will it still be attractive to the upper class although they will no longer be able to distinct themselves from others in that way then?

I hope that there will be no difference between social housing or luxury villas when it comes to re-use. Both should be possible and feasible. Depending on the budget, you can do more or less. The villa is an expensive building, but it is not more expensive than a regular villa of that size. It is in the same league, so to say. But it is not only the costs that matter: We observe how recently a number of relatively expensive circular buildings have been created which are presented as particularly sustainable. Claims on how this is achieved are sometimes vague, so we argue for a good standard for measuring circularity without disputable statements and expensive certification. 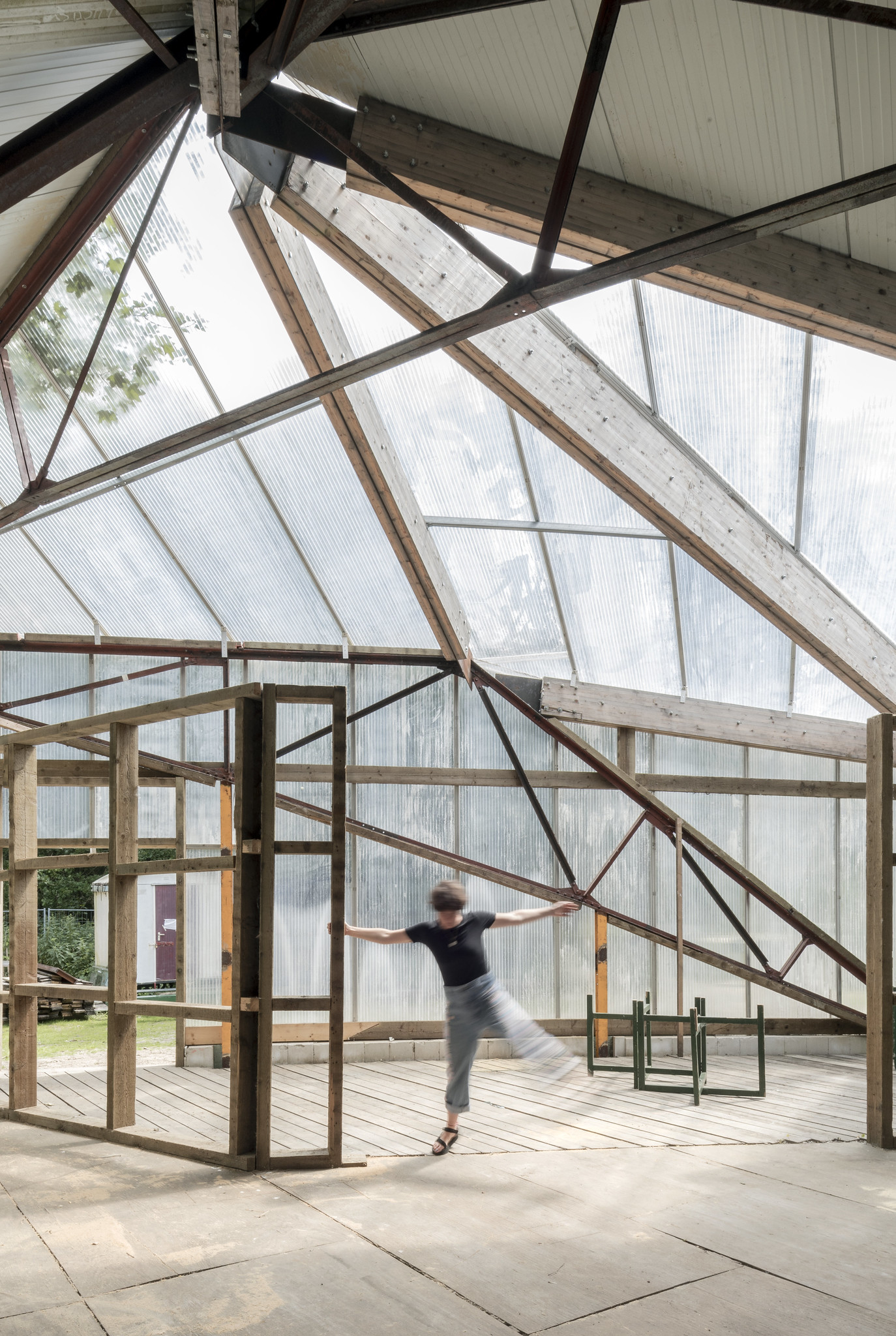 Your goal as an architect is not only to save CO2 and to leave the minimum ecological footprint, but you also want to create beautiful and functional spaces, don’t you?

Definitely! If a space is not beautiful and functional, it will not have a long life. We regard all the regular aspects of architecture – and we add to it. We are giving ourselves more restrictions that will help us to design in a certain way. We like complexity.

How do balance out the regular architectural demands and your ecological ambition?

We apply all regulations. So we are not going to make buildings that do not meet the building codes just because we only have certain materials available. But sometimes we like to challenge codes when we get the feeling that they refrain us from doing something for a reason which is invalid.

In the Netherlands, building legislation is relatively permissive, compared to Germany. So do you benefit from your location?

Probably yes. Some things might be hard in Germany, but I think it is a nice challenge. I would love to help architects in Germany, who want to design more circular buildings, with the lessons we have learned either in real life, in code or in negotiations with municipalities. We could see if our arguments would also hold in Germany or if there are certain restrictions we cannot overcome without doing extra tests for certification.

When we start a project, we make a harvest map of the materials that are available in the surroundings and we see what matches with the question of the client. Some of these materials have interesting stories and others do not. The story of a material should not be the main reason to re-use it. For us it is not a necessity to incorporate it in a new design. It can be nice to implement parts of a demolished building, like a school that was part of the daily life of people, into a new building in the area where the users recognize the old pieces because there is an emotional connection to that material. In other cases, it is absolutely not relevant for the users. It is just what it is and people will accept it as such. 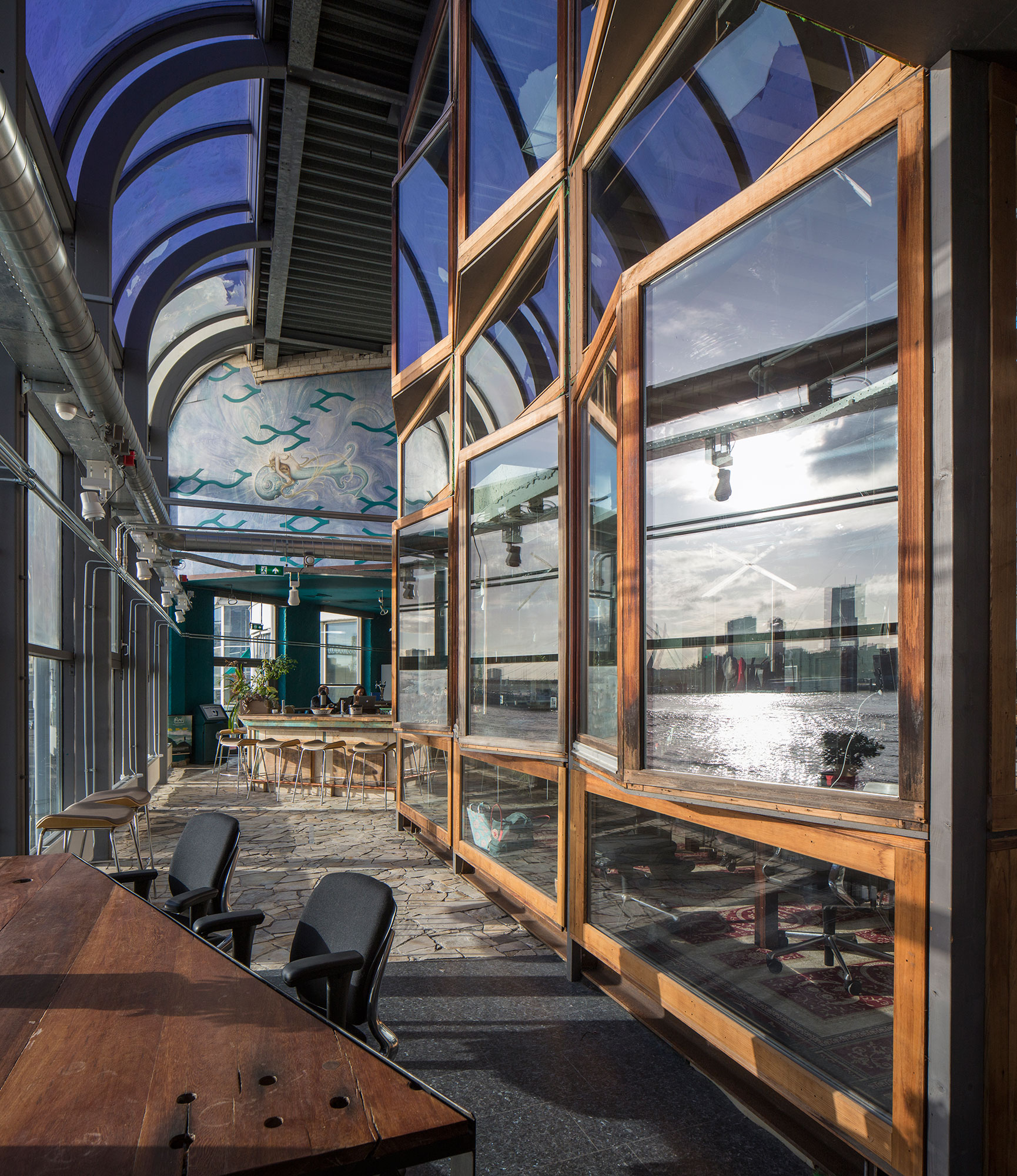 How important is the material’s source? What differences do you experience between working with industrial waste and materials from demolition?

Materials from demolition appear once – and you can harvest them, otherwise they are gone. But we are looking into demolition more and more as we discovered that there are also larger quantities available in this sector. These are usually really basic architectural components that cannot always be re-used as they are. For example, an old window frame will probably not be applied on an outer-shell façade again because codes have changed, but it can be used in interior situations – and then it will still be a window. Because: What are you going to turn it into that is not a window and still has the functionality?
The nice thing about industrial waste is that it comes in constant quantities, like steel sheets, for example. They follow a mechanical logic not for the sake of beauty, but just for efficiency. That in itself creates a kind of beauty if you see it in a bigger scale. I am very interested in finding mathematical patterns, repetitions and configurations in large amounts of material – and then using these to create something.

Being bound to the materials which are available, you have to adjust your formal language for every project. Nevertheless, would you say that you have a certain style?

We have sources that we might use more often than once – and that will help to create a certain language. There are several projects we have done with cable reels or steel sheets. And, of course, window frames can be available in a lot of sizes from different projects that keep occurring. Since we like finding different materials and combining them in an unprecedented way, our projects might be a bit eclectic. That is definitely not a traditional style which you are taught in architecture school where you have basically four things at your disposal: white, concrete, wood and glass. For us, it is not just about shape, but also about materiality. 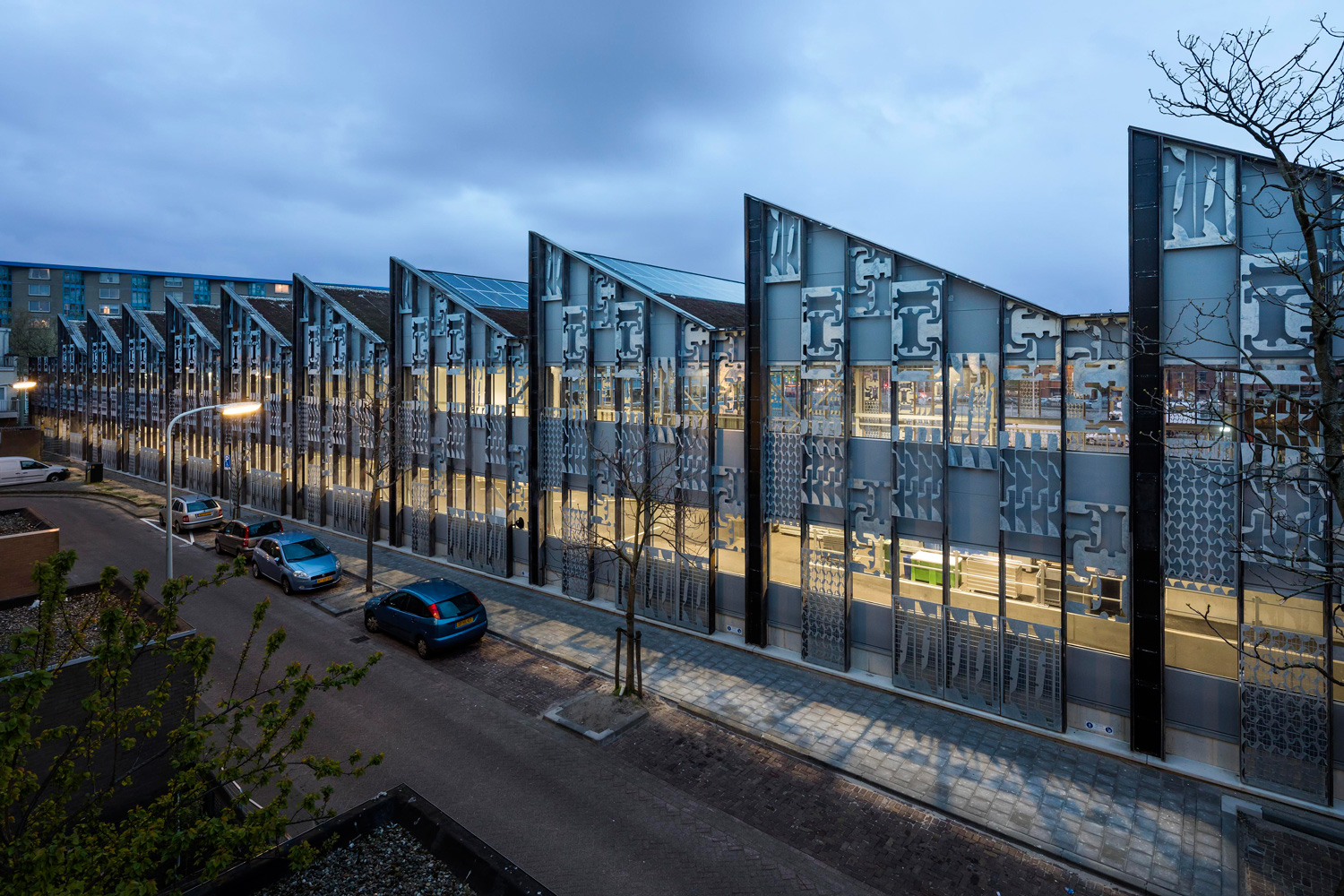 For the recycling center in The Hague, Superuse joined Wessel van Geffen Architecten as a consultant on circularity. The result is a building from waste for waste.

That was a specific request from the commissioner, the municipality. Storywise, it is a really quick fit. It is good to start at the source to make the city more circular. For us it is not a necessity to have this connection between functionality and material use. It can be nice, but it does not have to happen. Any building can become a more interesting or more sustainable one when re-use of materials is applied in the right way.

Buitenplaats Brienenoord is another project of yours, a kind of utopian cultural space on an island in Rotterdam. It is constructed from 90% of an old building which was located on the very same site before. So this shows that architecture is much more than material. Physically, the building is still the same – but in every other way, it is something completely new and different.

Basically, it is a reconfiguration of material to upgrade the functionality and the shape to something more interesting than the large shed used to be. But we added materials from other sources as well, in fact more than the 10 percent of the old building we could not use in the building itself. Those 10 percent have been superused in the landscaping around the building. 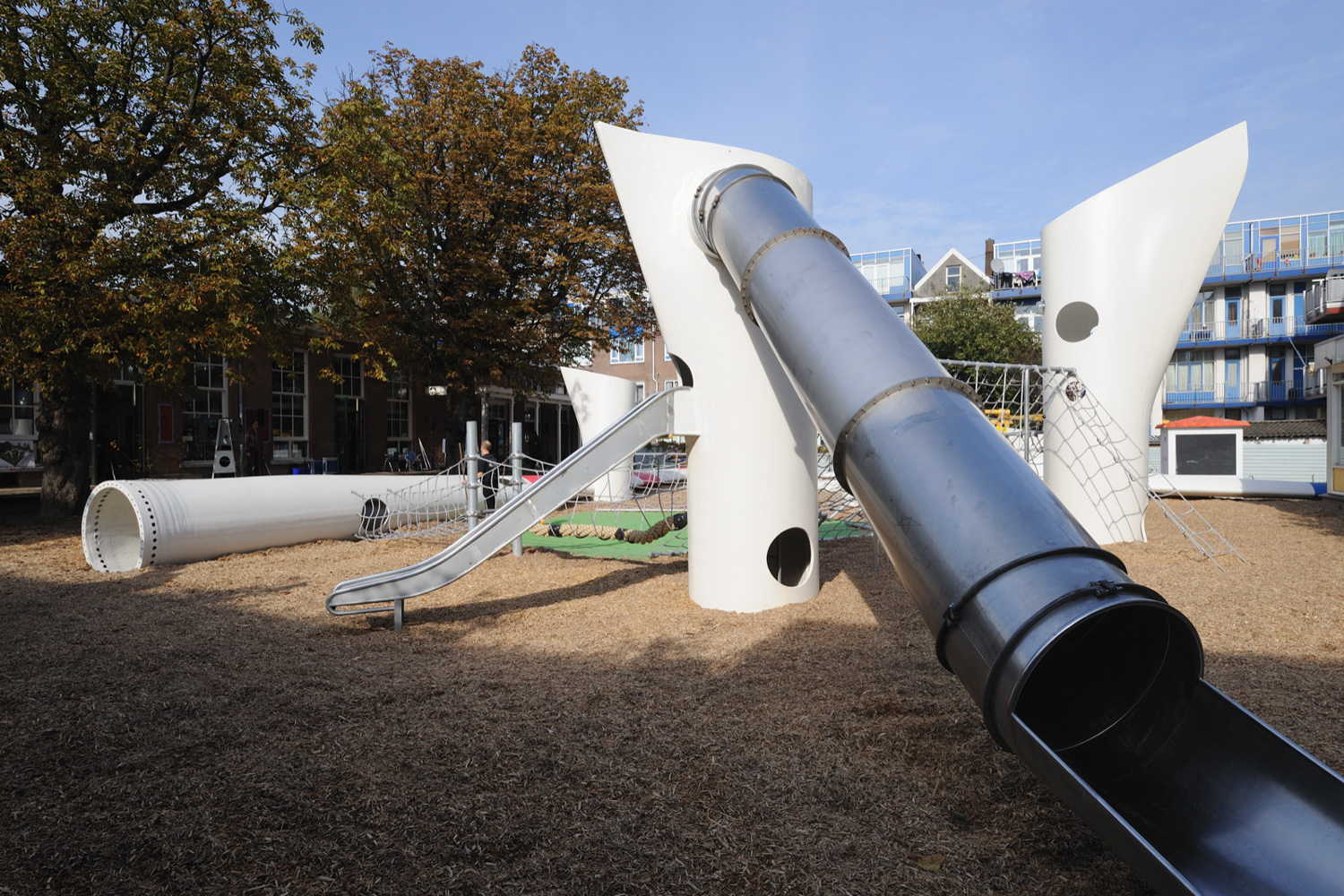 The playground Wikado is made from old wind turbine blades. They form an abstract structure encouraging children’s fantasy instead of imposing a certain theme park on their minds.

We were looking for volumes we could connect to create a landscape or an object that you can climb and walk into. Some of the initial designs were based on airplane wings or grain silos. At some point we found the windmill blades and it turned out that they were only too damaged to operate at large heights with strong windspeeds hitting them. But the load of children or even grown-ups running on and climbing through them is much easier to handle.

The sculptural tubes with holes in them might remind of the Lozzi Worm from the 70s which was made from plastics. In general, how easy is it to include historic references within the limits of found material?

I do not think that it is more difficult. References come in a lot of ways which can be just material, but also shapes or patterns. You do not need new materials to create something that feels monumental or soft. It is just about how you design it.

Maximilian Liesner, M.A., studied Urbanism, Art History and German Studies in Essen, Tübingen and Istanbul. He works at the German Architectur Museum in Frankfurt am Main as Volunteer and free Curator on the Exhibitions „SOS Brutalismus“ (2017), „Internationaler Hochhaus Preis 2018“ and „Paulskirche – Ein Denkmal unter Druck“ (2019). Since 2019 he is “Chef vom Dienst” at der architekt.