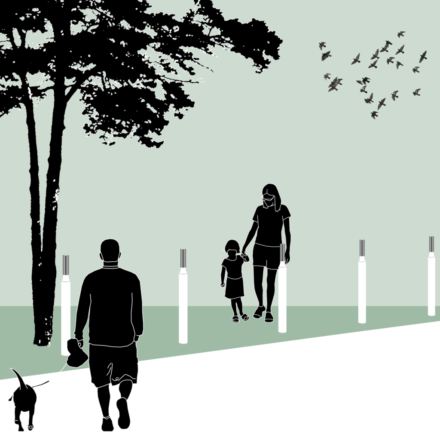 In 2004 the Rotterdam Center for Visual Arts (CBK) requested an alternative for Rotterdam for the famous ‘Amsterdammertje’.
Superuse Studios decided not to design a new one, but to find a suitable alternative at a car-breaker that would live up to the tough demands. Pretty soon it became clear that consumer vehicles do not contain parts that are transformable to such a traffic pole. In order to stop cars you need components of trucks. Six types were assessed for possible application.
The local availability, price, amount of actions to transform and programmatic demands that were set for the Feyenoordje led to the final choice. The drive shaft is the most suitable candidate. After a treatment of abrasive blasting and thermal spraying the part that is above ground can be sealed and varnished. The remaining 30cm below ground will be cast in concrete based on ecocement. Every drive shaft is accompanied by a seperate piece that can be slided on top. In this way the drive shafts can be turned into a base to organize urban space.