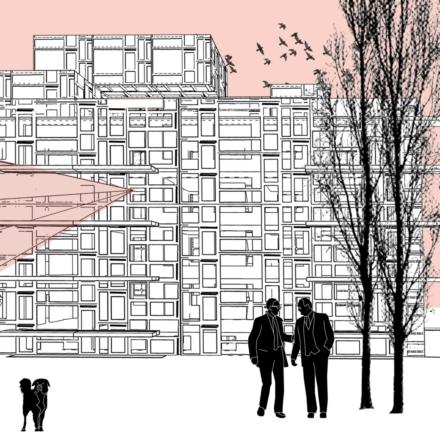 When renovating Dutch post-war apartment blocks, 90% of the buildings can be reused. These materials can even be used in the same blocks. This is one of the study results of Superuse together with Bouwcarrousel and commissioned by the Dutch Ministry of Economics environment’s research organisation: Senter Novem.

Many low-rise apartment blocks were build in short period of time in the Netherlands after the second world war. Those apartments are not sufficient to modern housing standards according to size and insulation. Nowadays many of those flats from the 50’s are being demolished. The types of houses are too undifferentiated and are occupied by the lowest incomes of Holland. The poverty, combined with big cultural differences causes social tension, rendering those areas into ‘ghetto’s’. Often also this is considered a reason for demolishment.

In the design by Superuse all shells can be re-used. The existing blocks get another layer on top with penthouses and roof gardens. The ground floor is lowered 1 meter to level with the former public space that is turned into gardens, thus creating an extra high apartment/workspace. The three levels in between remain unchanged but will be extended with 30% extra floor area. The amount of apartments will remain the same but this way more diversity and extra work space is created to give an economic impulse and possibilities to the inhabitants to work near home.

A climate-facade designed as a mosaic of recuperated window frames is covering the complete south side while the north side is extremely well insulated with a one meter thick wall consisting off fluid tanks filled up with shredded insulation materials.
By adapting this design to five apartment blocks a new area is created. Originally in these flat areas all open space was public, causing that no one felt responsible or at home in these big green spaces. By adding ground based family-houses and work functions this high amount of public space is diversified in public urban space, shared gardens and private gardens. By adding facilities for work and recreation at street level, shared gardens, winter gardens and roof gardens a new urban architecture is created.

The study is based on a southern part of Rotterdam, Hoogvliet.