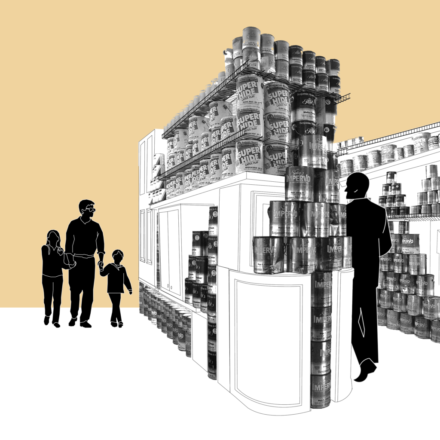 In 2009 we were invited by Droog Design to participate in Pioneers of Change, an exhibition on Governor’s Island, New York, that showed Dutch Design in various fields. We made an installation with available material flows in New York, that we borrowed for the festival. Visitors would walk through a second hand paint store, made from cupboards and wire shelving. After this a harvest map of municipal waste showed how much waste the city of New York generates and how all this waste is treated. Every week there is an equivalent of 42km of garbage trucks exporting waste to New Jersey, since New York has no garbage treatment facilities. In the last room the documentary about our studio, made by the American broadcast service PBS and narrated by Brad Pitt, was shown to explain how we work.

General information about the exhibition
Repairing instead of recycling, knitting a carpet with six foot long needles using wool from three kinds of Dutch sheep, elderly people slowly but attentively serving meals with smaller portions of foods from far away places and larger portions of those from nearby gardens, Dutch fashion designers collaborating with Native American bead masters and local lace makers together with students from Parsons The New School for Design, designers digging in local grounds to reveal differences in color and texture, movies about urban farming focused on New York, and left-over building materials collected over a month in New York available for creative re-use.