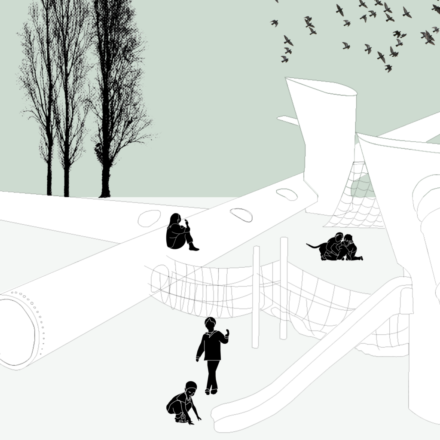 For the foundation “Kinderparadijs Meidoorn” Superuse Studios designed a new playground on their 1200m2 plot. The existing playground was in a bad shape and in need of renovation. 2012Architecten mapped the old situation and selected the elements that were fit for reuse in a new playground. After this process a design was made. Five (discarded) rotor blades are used to create a maze like space with a panna court in the center, placed on the existing concrete circle. Four towers are placed around it, each with a distinctive character. Between the towers a net is hanging. This is functioning as a climbing structure, but will also prevent balls ending up in the garden of the neighbours. More information about our projects with reclaimed rotor blade: read our brochure “blade made“.Team: Jeroen Bergsma, Césare Peeren, Jos de Krieger Publications about Wikado: