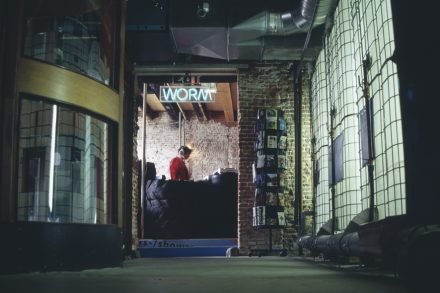 VOC-building
The warehouse of the Vereenigde Oostindische Compagnie – VOC (Dutch East Indian Company ) in Delfshaven was build in 1672, in 1742 it was rebuild, after a fire. The tough masonry building stands in the Achterhaven. The warehouse is build on a rectangle plan and has a classicistic facade. The building has two levels and a big unpartitioned attic below a shield-roof. The rectangle is divided into three deep warehouse sections and one dwelling section, all next to each other. In 1795 the VOC was nationalised and so was the building. Owned by the state it had many functions until it became a chemical plant at the end of the 19th century. After closure of the factory the plant was dismantled and the adjacent buildings and installations where torn down. The VOC-warehouse was the only one to be contained. Due to the use as a factory and by years of abandonment the building was in a poor state. A fire in that time didn’t help. The municipality did a big maintenance operation to contain the building for further disintegration. After this the building was empty for 8 years because within the terms of the monument act and the building laws it was hard to find a new function.

WORM@VOC
In 2005 WORM got clearance to use the VOC building in Delfshaven. The service dwelling was at the beginning of the design for WORM divided in rooms, the three naves where completely stripped and where no more than chipped load bearing walls and untreated oak floors. Despite the temporary character the plan had to answer the building law, but nothing could be altered, literally: not one nail or screw should be put into the wall.
Therefore the design is closely tuned to the existing structure. The public areas are situated in the empty naves and the office-space and the studio’s in the former dwelling. The store, as the most public space, is situated at ground level. On this level there is also the workspace for the janitor who is already connected to the building for 30 years. The auditorium is situated at the first floor in the two right naves because these are the highest spaces and these adjacent naves are connected spatially by means of big existing openings in the wall. This arrangement and the necessary sound-insulation is reached by a number of double glazed walls on different positions from the facade. In the remaining space the mechanics are placed. Through existing gaps all of the installation infrastructure is woven, five pieces of furniture are linked to this structure.

Route Architecturale
The spatial lay-out is a route through the monumental building. The visitor is first guided by the facade where the three aspects of WORM present themselves: the movie-studio, the music shop and the movie/music stage. Via the entrance on the ground floor the visitor walks through a store with automatic bar, continues through the burned-out and monumental staircase into the foyer. From here one can enter the auditorium to see a movie or a concert. This lay-out makes it possible to adjust the space to the expected amount of visitors. From entrance to auditorium the architecture is becoming less and less outspoken, the attention should be for the performances. The sound insulation is from entrance to auditorium higher: no sound reaches into the auditorium, in return, music can be produced up to 105 dB.

Backbone and furniture
The demand not to change the old warehouse meant that the needed ventilation shafts had to be woven through existing openings. Connected to this shaft are also cable ducts, water pipes and sewer pipes. This infrastructure forms a ‘zinc’ wire through the building. Five moveable pieces of furniture are linked to this backbone; the entrance; the toilet units, the store, one manned and one unmanned bar. These are all made by different artists. To create unity in the design every piece of furniture had to live up to a number of basic conditions: moveable, modular, made of 75% waste materials and connected to the infrastructure. By placing and clamping these mobile, functional furniture units a sort of festival inventory is placed into the building, all because of the temporary use of space. If WORM has to move again they could place everything in a truck and move it to another building.

Clamp connections and reused materials
To not alter the former warehouse, additions are made not interventions, nothing is demolished. All of these additions are kept apart of the existing structure and when necessary it is connected by means of a clamps.
The plan is executed by WORM with the use of 95% reused materials. The first sketches where used to make a shopping list. With this list WORM could ‘harvest’ materials from offices nearby that were to be demolished. On basis of the found materials the final design was made.
The sound insulating walls are placed under an angle for acoustic reasons. This made it possible to attach them to the ‘floating floors’ and let them lean onto the beams. By using glazed walls for the insulation we break with the idea that an auditorium should be a ‘black box’, while the monument keeps its identity. The walls are placed onto a floating floor which is build up from four layers of system ceiling on which a multiplex floor has been placed. The glass and the panel ceiling are harvested from offices near to the VOC-building. The double glazing that was used had a fixed size, a composition is made to fill the missing parts with 40 mm multiplex with recycled rubber granulate. The ventilation ducts are reused as well, on basis from what was found a puzzle is made with the harvested material, missing parts are ordered to make everything fit.

The Wormentry
The architect has, as one of the five part commissions, executed the entry himself. The entry – exit functions as a place to enter but it also is the place where fresh air is let into the building and used air is blown out. The entry is the engine room: here the temperature of the air is regulated, here comes the gas, electricity and water altogether, its use is measured. Here a lot of engines are buzzing.

The entry exists of a 3 meter high galvanised ventilation shaft, this shaft which sticks out a facade catches the visitors and guides them in a 180 degrees curve inside. Three nozzles blow out used air on the side of this shaft. Waiting for the box-office in this curved shaft one finds himself in a lit space, walls and ceiling are made from dated perfume advertorials. Meanwhile one passes a ventilation shaft where fresh air is taken in. After paying one enters through a monumental teakwood turnstile which is placed in the middle of the engine room. The arrangement of this place comes from all the needed climate installations, three big air treatment units that are the starting point for all ventilation ducts to the different spaces in the building, the heating apparatus, gas-meter and the main fuse board. Everything is visible and functional placed around the monumental turnstile. On one side the entry space is bordered by the back of the toilet units, here the technical installations are visible.